On the tenth anniversary of the war in Afghanistan, members of Peace Action Bay Ridge set up a protest in front of the Dyker Heights office of (mis) Representative Michael Grimm. Grimm has been a staunch and unbending supporter of these wars and war spending to the detriment of his constituents and their communities. Hard-pressed working families, striving just to make ends meet, are suffering job loss, home foreclosures and vicious cutbacks to urgently-needed services. The politicians cry lack of money but, as Grimm has done in Congress, spend endless billions on the never-ending wars while, at the same time, refuse to tax the wealthy Wall Street and the large corporations who brought the economy to the point of breaking.

Passersby overwhelmingly supported calls on Grimm to finally end these wars and to enact bills in Congress that would redirect money to rebuild our communities and put Americans back to work. Peace Action handed out flyers showing that District taxpayers have actually shelled out four billion dollars over the last ten years to fund the wars. That's a huge amount of money that could have been better used at home to rebuild crumbling schools, hire more teachers to provide smaller class sizes, fix the subways and buses and take care of many other services that are being cut. 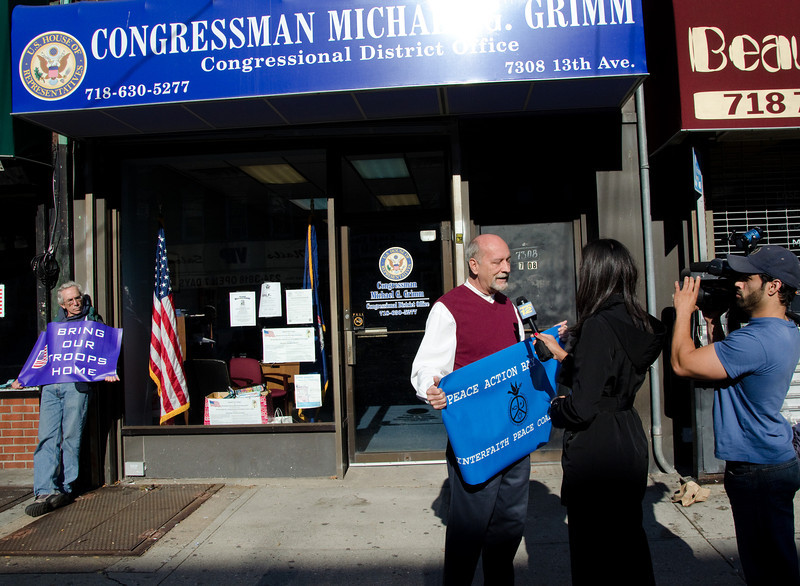