If you weren't there you missed one of the most uplifting and exciting events for social change seen in many years. It would not be hyperbole to say that this could be the beginning of a new day in our country: the day peope, young and old, Black and white, trade unionsts and community activists and just ordinary New Yorkers and Americans from all over, pissed off over the state of current affairs, took to the streets to say enough is enough!

What a beautiful thing - thousands marched past our Brooklyn For Peace banner with signs representing a wide collection of organizations. Others carried their own handmade signs, many with wonderfully creative and expressive slogans scrawled on them. Here was the challenge to the lie that today's youth are not interested in change. They were out by the thousands, many of them students from the city's schools. Many were graduates of colleges, saddled with tens of thousands of dollars of student loans but with no hope of a job -- even with the college degrees! And here were the city's public workers, marching with their fellow union members- many of them threatened with layoffs or pay cuts and give backs. All came to say - "Let the corporations and banks pay for the mess they've created!"

On and on through the early evening hours they marched, an endless throng who were showing with their spirit and great numbers that they were fed up and not going to take it any more. May this be the beginning of change that we've all worked so hard for and hoped so long for. May it grow into a mighty movement that begins to challenge the values of a society that can spend its wealth on endless wars and Pentagon budgets while, at the same time, cutting jobs, foreclosing people's homes, demolishing needed services that people depend on and failing to repair crumbling public schools or deteriorating bridges, roadways and subways.

Here are a few photos of this historic day's event.
Read More 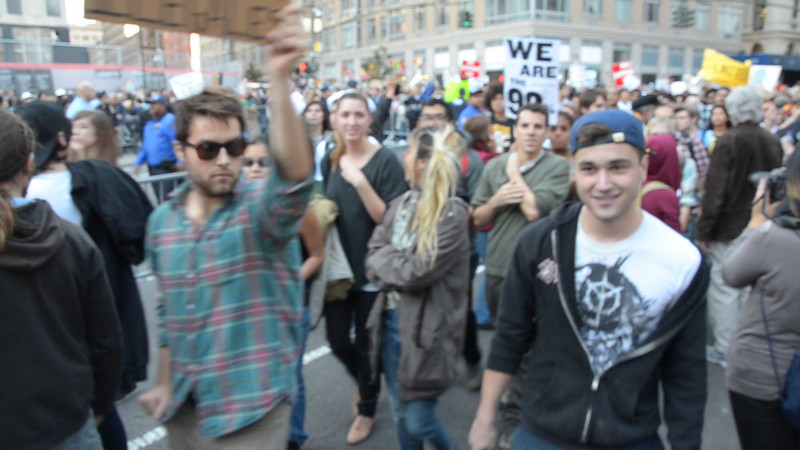 Press PLAY to see a short video of people marching past our Brooklyn For Peace banner being held aloft at Foley Square.